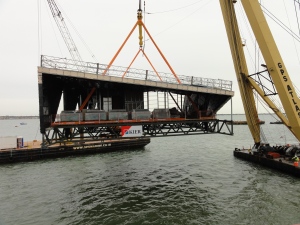 Following many years of work to upgrade The Pier following the fire of 2005 and a few setbacks, finally on the 17th of May 2012 the new Pier Pavilion, which will be a cultural centre, was winched up from an enormous barge by an equally impressive crane and then slowly lowered into position on the Pier deck. There will now follow a period for fitting it out which should last about 8-10 weeks.

Southend Pier, the longest pleasure pier in the world and probably the most iconic pier ever, did not receive Government support! Southend Council has approved a concept from an achitectural and engineering firm to work up the details. W

hite is a Swedish architectural firm with tremendous experience in prestigious schemes and Price and Myers are a reputable engineering firm. Southend Conservative council has put £3m into next years budget to move the Pier Head forward.

More details as they become available.

A survivor, a pier to be proud of!

Southend Pier is an historical icon it is also the longest pleasure pier in the world, at 1.33 miles. Soon after authorisation was granted in 1829, the Lord Mayor of London laid the first foundations for the pier. By June 1830 a 600-foot (180 m) wooden pier was opened, based on wood piles. However this was still too short to be usable at low tide, so by 1833 it had been extended to three times its length and by 1848 was the longest pier in Europe at 7,000 feet. It was sold by the original owners for £17,000 in 1846 after facing financial difficulties. In 1873 it was sold to the then equivalent of the Council. In 1877 the ‘Council’ decided to replace the pier with a new iron pier.

The Pier has survived exciting and challenging times. It has lived through four fires, 1959, 1976, 1995, 2005, a boat crash, 1983, and two world wars as well as braving the elements of the Thames Estaury with its waves, winds and salty environment.

in 2000 a new lifeboat station and sundeck were built at the Pier Head in partnership with the RNLI; a new Pier sewage system and fire main were installed, and work took place to re-deck the 1976 fire damaged areas.

Southend Borough Council has more recently invested in the pier to restore it as a visitor attraction. Sucessfully bidding for and receiving funding from the EU. A new entrance built in glass to give a distinctive modern style was opened in 2003 which also houses the Pier Museum and giftshop and substantial improvements followed soon afterwards to connect the Pier to the town with new lifts and walkways on a completely redesigned Pier Hill. The fire of October 2005 devastated the Pier Head, this time destroying the far station, pub, gift shop, amusements, toilets, takeaway, and part of the restaurant. By 1st December 2005 a temporary platform had been built by the Council allowing the first mile of the Pier to re-open. At the beginning of August 2006 a permanent walkway was completed allowing Pier visitors to access the Pier Head whilst work proceeded with the repairs to the damaged Pier.

This year a new Pier Head station was opened to replace the one damaged by the fire of 2005, once again allowing the trains to run the full length of the rails. Boats have docked at the pier for both excursions and to visit including the world’s largest ocean-going tall ship the very popular russian SS SEDOV.

Determined to see the Pier fulfil its important role for the town and to give Southend a pier to be proud of  Southend Council bid for further Government funding through the Seachange programme and in September 2009, Southend Council announced the winner of a design contest for a new pier head – a Swedish based architecture firm, White arkitekter. Their design is called Sculpted by Wind and Wave and it was chosen from 73 international and local entries. Southend is still awaiting the outcome of its bid but hopes to be able to develop the plans/designs with the winning architects.